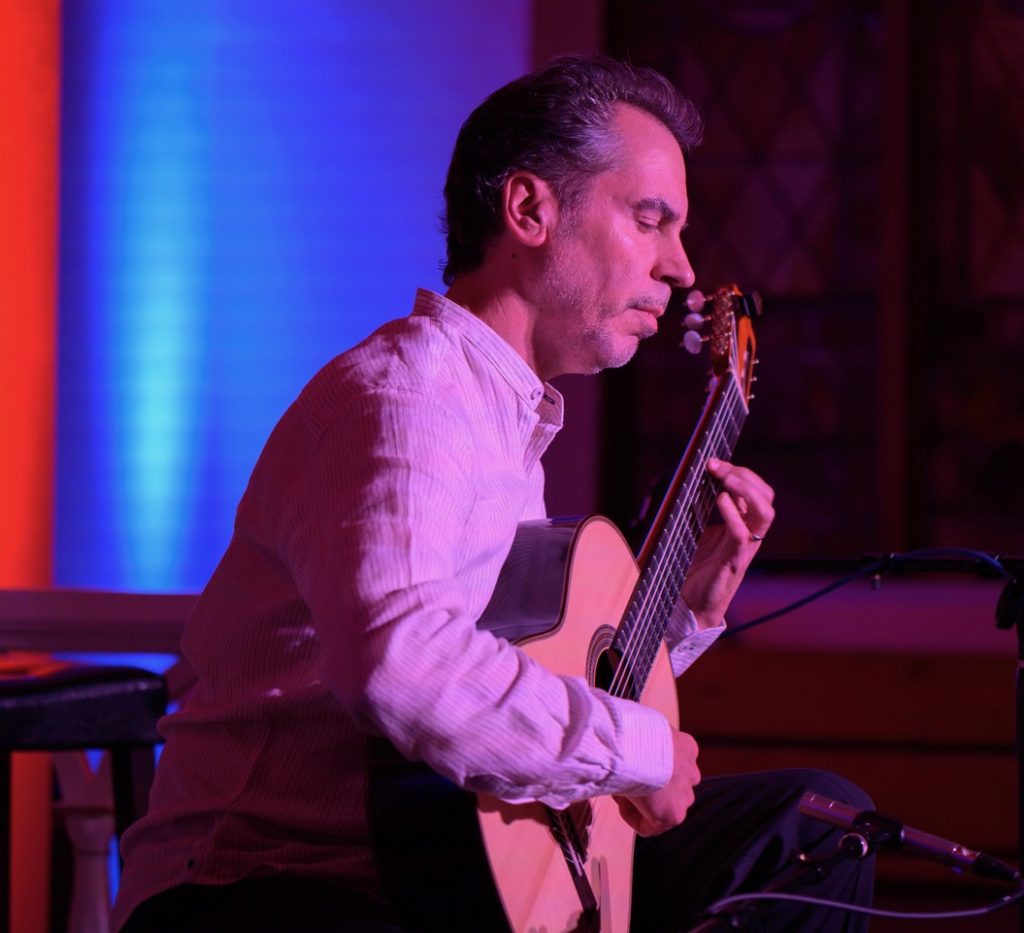 Tomas Rodriguez is a New York City based guitarist who has developed a unique repertoire for guitar performance that is rooted in his ancestry and guided by the diverse styles of music that have inspired him. These include the folk music of Galicia, Spain, the music of Venezuelan harp masters Juan Vicente Torrealba and Malian kora virtuoso Toumani Diabaté. Informed by this broad palette, Rodriguez’ own compositions display an engaging groove, touching harmonies and a mesmerizing exploration of the guitar’s rich background in the music of Africa and the Americas. In addition to his solo work, he also performs in duos with the Gambian kora master Salieu Suso and jazz cellist Barry Kornhauser.

Born in Washington D.C. of a Spanish father and a mother from the Appalachian region of Virginia, Rodriguez grew up in New York, New Jersey and Idaho. As a child he was inspired by his father’s eclectic record collection, which included Frank Sinatra, Beethoven, the Venezuelan harpist Juan Vicente Torrealba and Latin crooner
Lucho Gatica.

As a teen, he learned to play electric guitar by ear from Jimi Hendrix records, and went on to study classical guitar with Sharon Isbin at the Manhattan School of Music. He later toured with the renowned NYC based Pregones Theatre and informally immersed himself in flamenco on the streets of Sevilla over successive summers. Rodriguez’ guitar playing has captivated audiences nationally and internationally. Performance highlights include the International Festival of the Guitar in Lima, Peru, the Brooklyn Museum, Merkin Hall, and Trinity Church in New York City as well as the New Jersey Center for the Performing Arts (NJPAC), the World Expressions Series at Boise State University and the University of Virginia. He has commercially released three full length albums: Guitarra de mi Alma, Dialogue, and most recently, Ruminations.

Tomas Rodriguez is a member of The American Federation of Musicians, ASCAP and The Guitar Foundation of America.

“Tomas Rodriguez plays guitar with a passionate originality, with an individual touch, drawing from the musical heart of the Latin world.” The folk and classical traditions of Spain and South America are richly evident in Rodriguez’ playing, but he transmutes them into a sound clearly, fervently his own”.
— Norman Weinstein (Christian Science Monitor)

DUETS WITH THE SPANISH GUITAR AND MANDIKA KORA

Kora player Salieu Suso (the Gambia) and guitarist Tomas Rodriguez first collaborated as part of a larger ensemble at a United Nations gathering honoring diplomats from Africa and Spain.  Later, they realized that the guitar and kora were a natural fit, and began to explore creating a duo repertoire – drawing on influences from the Mandinka griot repertoire, contemporary flamenco guitar and other diverse influences – such as the arpa llanera music of Venezuela.  The duo seeks to create an original sound while still honoring the kora tradition, creating an uncontrived, organic “conversation” between the two instruments. 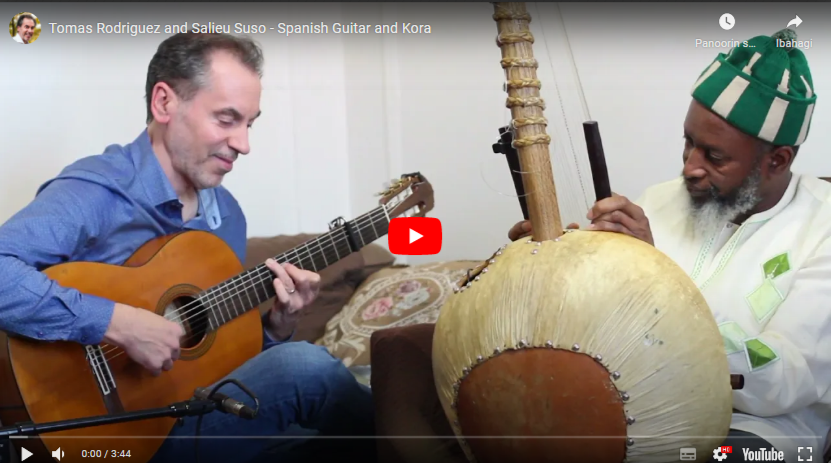 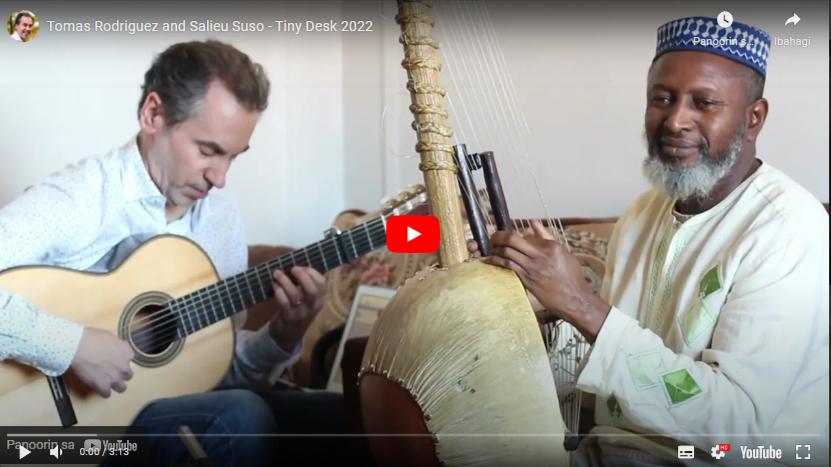 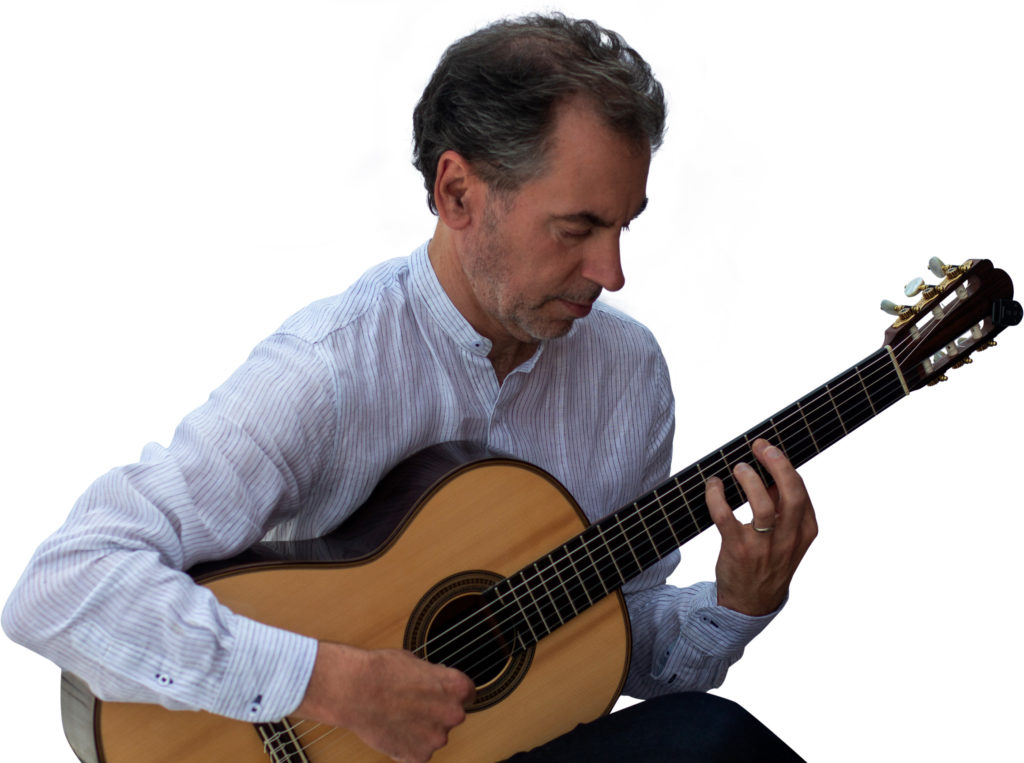 Trio with Cesar Gabarini and Dennis Bulhoes. Consulate of Brazil.